Good news: DCM and DAWCO are celebrating their 70th anniversary
View all news

The Adventures of Davie and DAWCO

It was in 1825 that the Davie shipyard, located in Lévis on the banks of the St. Lawrence River, first opened. Several decades of ship production passed before the arrival of DAWCO. In March 2017, Davie and DAWCO set off together on a great new adventure.

DAWCO’s first mandate included a specialized electrical service comprising of a dozen electricians who were responsible for cable pulling on the MV Asterix ship. In a matter of weeks, the DAWCO team demonstrated to the Davie site supervisor, Daniel Leboeuf, that the work could be performed in collaboration with Davie employees. A trusting relationship was forged from then on. Davie had a major challenge for DAWCO by requesting an additional 100 electricians to perform various tasks, including the pulling of more than 1660 km of cable, various electrical connections, and the supervision of both DAWCO and Davie personnel. 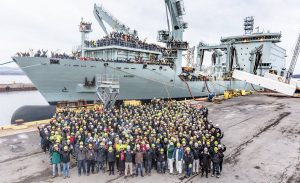 A couple of weeks after the departure of the MV Asterix ship, Davie had to ensure the delivery of two (2) ferries. In order to do so, DAWCO was mandated to provide electrical supervisors and approximately thirty electricians to complete electrical work aboard the two ferries. 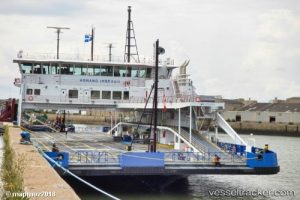 Still in the running to becoming a strategic partner under Canada’s National Shipbuilding Strategy, Davie was awarded a mandate to convert three (3) icebreakers. The DAWCO team is already on site supporting Davie on many fronts. At the time of writing, the first icebreaker is already navigating the St. Lawrence River for sea trials.
Congratulations to the whole team! 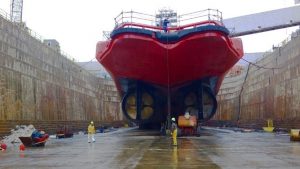 The Davie shipyard was recently awarded the mandate to modernize a frigate in dry dock at the shipyard. This is a new and exciting challenge for the DAWCO team. When you think of frigates, the first thing that comes to mind is the Canadian Army, and with that comes the obligation of having a reliability and controlled goods rating for all employees working on the frigates. A big thank you to the Human Resources team who succeeded in taking the necessary steps to obtain the coveted green card.

To wrap things up

Over the course of these different mandates, DAWCO has completed more than 133,000 man-hours, and counting! I would like to thank each member of the team who, from near and far, has contributed to the success of this great adventure by allowing DAWCO to prove itself once again in the execution of its projects, and securing its position as a partner of choice in the naval sector. Special thanks also goes to the entire Davie team for their complete trust in us, which I hope will continue for decades to come!